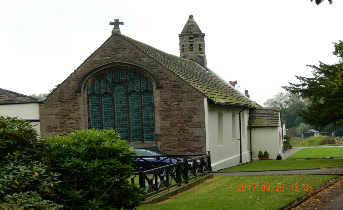 In April 1500 a Chantry was founded in Lathom Park by Thomas Stanley, the first Earl of Derby.

A Chantry was a place where Masses were recited at an altar for the wellbeing of the founder during his lifetime and for his soul after his death. Where a Chantry formed a separate Chapel, as at Lathom, there were often Almshouses or a hospital attached. In this was housed and cared for a number of poor men or bedesmen to whom the Chantry Priest was Chaplain. The bedesmen’s duties were to attend church daily to pray for the soul of their benefactor.

Its history up to 1924 was much involved with the families of the Stanleys (Earls of Derby) and later the Bootle Wilbrahams (Earls of Lathom and Lord Skelmersdale).

Since 1924 it has been attached to the parish of Ormskirk.

The Chapel is set in pretty and well tended gardens. Outside it also has a burial vault within railings.

Note also “The Cromwell stone” on the right of the driveway

A warm welcome awaits you at our beautiful Chapel,  set in the lovely countryside near to the remains of Lathom Hall, once the residence of the Earls of Lathom